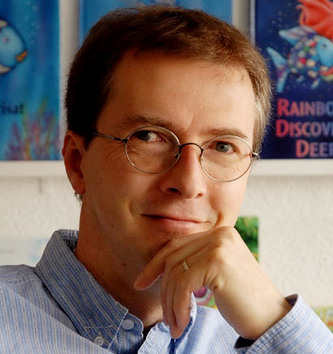 Marcus Pfister was born in Berne, Switzerland, and began his career as a graphic artist in an advertising agency. In 1983, he decided to dedicate more time to artistic pursuits, and began to write and illustrate his first book, The Sleepy Owl, which was published in 1986. His best-known work to date is The Rainbow Fish, which has remained on bestseller lists across the United States since 1992.

Marcus does most of his illustrations for children's books in watercolors. He begins each book by stretching watercolor paper over a wooden board so that it won't warp when wet. He then copies his rough sketches onto the paper in pencil. At this point, he is ready to begin painting. For backgrounds and blended contours, he uses wet paint on wet paper to get a softer effect. For sharper details, he first lets the paper dry, then paints the final picture layer by layer. When the illustration is complete he cuts the paper from the wooden board.

For books that feature holographic foil stamping, he then tapes a piece of transparent film over the art and indicates with a black marker where the foil stamping should be. The foil stamping is then applied during the production process after the pages are printed and before the final binding.

Marcus and his wife, Kathryn, work together in Berne, where they live with their three children.

The Rainbow Fish
The Rainbow Fish is an international bestseller and a modern classic. Eye-catching foilstamping, glittering on every page, offers instant child-appeal, but it is the universal message at the heart of this simple story about a beautiful fish, who learns to make friends by sharing his most prized possessions, that gives the book its lasting value.
02

Rainbow Fish to the Rescue!
In this exciting new adventure, Rainbow Fish is torn between his newfound friends and a lonely striped fish who is not allowed to join the group because he lacks a shiny scale. When a dangerous and hungry shark suddenly appears, Rainbow Fish must decide: Should he risk losing his new friends - maybe even his life - for the little stranger?
03

Rainbow Fish and the Big Blue Whale
When a big blue whale comes to live near their reef, there is a misunderstanding between him and Rainbow Fish and his friends that leaves everyone very unhappy and hungry.
04

Milo and the Magical Stones
Milo, a resourceful mouse, makes an extraordinary discovery that changes his life forever.
05

Penguin Pete
Pete the penguin has a good time playing on land with his fellow birds and learning how to swim in the sea.
06

Rainbow Fish and the Sea Monsters' Cave
Boasting the same eye-catching holographic foil stamping of the earlier books in the best-selling series, this eagerly awaited new book featuring Rainbow Fish will delight his millions of fans. It's Rainbow Fish's most challenging adventure yet, for he must brave the Sea Monsters' Cave, rumored to be the most dangerous place in the ocean, to find healing algae to cure the ailing bumpy-backed fish. Warned by his friends about the dreadful denizens of the deep--the giant rock monsters, the five-eyed globe fish, and the horrible creature with a thousand arms--Rainbow Fish, accompanied by the little blue fish, musters all his courage and sets out on an exciting quest. In a satisfying and reassuring conclusion, Rainbow Fish discovers that by confronting his fears, it is possible to overcome them, and that sometimes there are simple, completely nonthreatening explanations for fabled dangers.
07

You Can't Win Them All, Rainbow Fish
A brand new title in the bestselling Rainbow Fish series!

Everyone loses once in a while. But being a good sport when you lose isn’t always easy—not even for Rainbow Fish. A lighthearted look at accepting loss without losing your sparkle!
08

Dazzle the Dinosaur
The bestselling author of The Rainbow Fish and The Christmas Star returns with a new picture about Dazzle, a dinosaur with a beautiful glittering spine.
When Dazzle and his friend, Maia the Maiasaurus, set out on an adventure, they meet a terrible Dragonsaurus! Will Dazzle's shining spines save the day?
09

Questions, Questions
How do birds learn how to sing?

What brings summer after spring?

What turns the leaves from green to brown

and sends them floating gently down?

In thirteen engaging couplets, Marcus Pfister opens children’s eyes to the wondrous mysteries all around them.
10

Rainbow Fish Discovers the Deep Sea
The Rainbow Fish series has sold millions of copies world wide, and now this beloved character returns with the last book in the hardcover series.