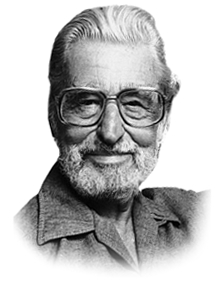 Theodor Seuss Geisel was born 2 March 1904 in Springfield, MA. He graduated Dartmouth College in 1925, and proceeded on to Oxford University with the intent of acquiring a doctorate in literature. At Oxford he met Helen Palmer, who he wed in 1927. He returned from Europe in 1927, and began working for a magazine called Judge, the leading humor magazine in America at the time, submitting both cartoons and humorous articles for them. Additionally, he was submitting cartoons to Life, Vanity Fair and Liberty. In some of his works, he'd made reference to an insecticide called Flit. These references gained notice, and led to a contract to draw comic ads for Flit. This association lasted 17 years, gained him national exposure, and coined the catchphrase "Quick, Henry, the Flit!"

In 1936 on the way to a vaction in Europe, listening to the rhythm of the ship's engines, he came up with And to Think That I Saw It on Mulberry Street, which was then promptly rejected by the first 43 publishers he showed it to. Eventually in 1937 a friend published the book for him, and it went on to at least moderate success.

During WW II, Geisel joined the army and was sent to Hollywood. Captain Geisel would write for Frank Capra's Signal Corps Unit (for which he won the Legion of Merit) and do documentaries (he won Oscar's for Hitler Lives and Design for Death). He also created a cartoon called Gerald McBoing-Boing which also won him an Oscar.

In May of 1954, Life published a report concerning illiteracy among school children. The report said, among other things, that children were having trouble to read because their books were boring. This inspired Geisel's publisher, and prompted him to send Geisel a list of 400 words he felt were important, asked him to cut the list to 250 words (the publishers idea of how many words at one time a first grader could absorb), and write a book. Nine months later, Geisel, using 220 of the words given to him published The Cat in the Hat, which went on to instant success.

In 1960 Bennett Cerf bet Geisel $50 that he couldn't write an entire book using only fifty words. The result was Green Eggs and Ham. Cerf never paid the $50 from the bet.

Dr. Seuss is the author of books: Green Eggs and Ham, The Cat in the Hat, Oh, the Places You'll Go!, How the Grinch Stole Christmas!, The Lorax, One Fish, Two Fish, Red Fish, Blue Fish, Horton Hears a Who!, The Sneetches and Other Stories, The Cat in the Hat and Other Dr. Seuss Favorites, Fox in Socks

Green Eggs and Ham
“Do you like green eggs and ham?” asks Sam-I-am in this Beginner Book by Dr. Seuss. In a house or with a mouse? In a boat or with a goat? On a train or in a tree? Sam keeps asking persistently. With unmistakable characters and signature rhymes, Dr. Seuss’s beloved favorite has cemented its place as a children’s classic. In this most famous of cumulative tales, the list of places to enjoy green eggs and ham, and friends to enjoy them with, gets longer and longer. Follow Sam-I-am as he insists that this unusual treat is indeed a delectable snack to be savored everywhere and in every way.

Originally created by Dr. Seuss, Beginner Books encourage children to read all by themselves, with simple words and illustrations that give clues to their meaning.
02

The Cat in the Hat
Poor Sally and her brother. It's cold and wet and they're stuck in the house with nothing to do . . . until a giant cat in a hat shows up, transforming the dull day into a madcap adventure and almost wrecking the place in the process! Written by Dr. Seuss in 1957 in response to the concern that "pallid primers [with] abnormally courteous, unnaturally clean boys and girls' were leading to growing illiteracy among children, The Cat in the Hat (the first Random House Beginner Book) changed the way our children learn how to read.

Oh, the Places You'll Go!
For out-starting upstarts of all ages, here is a wonderfully wise and blessedly brief graduation speech from the one and only Dr. Seuss. In his inimitable, humorous verse and pictures, he addresses the Great Balancing Act (life itself, and the ups and downs it presents) while encouraging us to find the success that lies within us.


And will you succeed?
Yes! You will indeed!
(98 and ¾ percent guaranteed.)


A modern classic, Oh, the Places You'll Go! was first published one year before Dr. Seuss's death at the age of eighty-seven. In a mere fifty-six pages, Dr, Seuss managed to impart a lifetime of wisdom. It is the perfect send-off for children starting out in the maze of life, be they nursery school grads or newly-minted PhD's. Everyone will find it inspired good fun.
04

How the Grinch Stole Christmas!
"The Grinch hated Christmas! The whole Christmas season!
Now, please don't ask why. No one quite knows the reason."

Dr. Seuss's small-hearted Grinch ranks right up there with Scrooge when it comes to the crankiest, scowling holiday grumps of all time. For 53 years, the Grinch has lived in a cave on the side of a mountain, looming above the Whos in Whoville. The noisy holiday preparations and infernal singing of the happy little citizens below annoy him to no end. The Grinch decides this frivolous merriment must stop. His "wonderful, awful" idea is to don a Santa outfit, strap heavy antlers on his poor, quivering dog Max, construct a makeshift sleigh, head down to Whoville, and strip the chafingly cheerful Whos of their Yuletide glee once and for all.

Looking quite out of place and very disturbing in his makeshift Santa get-up, the Grinch slithers down chimneys with empty bags and stealing the Whos' presents, their food, even the logs from their humble Who-fires. He takes the ramshackle sleigh to Mt. Crumpit to dump it and waits to hear the sobs of the Whos when they wake up and discover the trappings of Christmas have disappeared. Imagine the Whos' dismay when they discover the evil-doings of Grinch in his anti-Santa guise. But what is that sound? It's not sobbing, but singing! Children simultaneously adore and fear this triumphant, twisted Seussian testimonial to the undaunted cheerfulness of the Whos, the transcendent nature of joy, and of course, the growth potential of a heart that's two sizes too small.

This holiday classic is perfect for reading aloud to your favorite little Whos.
05

The Lorax
"UNLESS someone like you...cares a whole awful lot...nothing is going to get better...It's not." Long before saving the earth became a global concern, Dr. Seuss, speaking through his character the Lorax, warned against mindless progress and the danger it posed to the earth's natural beauty. His classic cautionary tale is now available in an irresistible mini-edition, perfect for backpack or briefcase, for Arbor Day, Earth Day, and every day.
06

The Sneetches and Other Stories
Illus. in full color. "Four funny easy-to-read stories all with subtly planted moral lessons."--Publishers Weekly.

THE SNEETCHES
"Now, the Star-Belly Sneetches / Had bellies with stars. / The Plain-Belly Sneetches / Had none upon thars." This collection of four of Dr. Seuss's most winning stories begins with that unforgettable tale of the unfortunate Sneetches, bamboozled by one Sylvester McMonkey McBean ("the Fix-it-up Chappie"), who teaches them that pointless prejudice can be costly.

THE ZAX
Following the Sneetches, a South-Going Zax and a North-Going Zax seem determined to butt heads on the prairie of Prax.

TOO MANY DAVES
Then there's the tongue-twisting story of Mrs. McCave--you know, the one who had 23 sons and named them all Dave. (She realizes that she'd be far less confused had she given them different names, like Marvin O'Gravel Balloon Face or Zanzibar Buck-Buck McFate.)

WHAT WAS I SCARED OF?
A slightly spooky adventure involving a pair of haunted trousers--"What was I scared of?"--closes out the collection. Sneetches and Other Stories is Seuss at his best, with distinctively wacky illustrations and ingeniously weird prose. (Ages 4 to 8) --Paul Hughes
09

The Cat in the Hat and Other Dr. Seuss Favorites
11 complete stories at a great price!

The Cat in the Hat read by Kelsey Grammer
Horton Hears a Who read by Dustin Hoffman
How the Grinch Stole Christmas read by Walter Matthau
Did I Ever Tell You How Lucky You Are? read by John Cleese
The Lorax read by Ted Danson
Yertle the Turtle, Gertrude McFuzz, and The Big Brag read by John Lithgow
Thidwick, the Big-Hearted Moose read by Mercedes McCambridge
Horton Hatches the Egg read by Billy Crystal
The Cat in the Hat Comes Back read by Kelsey Grammer
10

Fox in Socks
In this hilarious book, the irrepressible Fox in Socks teaches a baffled Mr. Knox some of the slickest, quickest tongue-twisters in town.

With his unique combination of hilarious stories, zany pictures and riotous rhymes, Dr. Seuss has been delighting young children and helping them learn to read for over fifty years. Creator of the wonderfully anarchic Cat in the Hat, and ranked among the UK's top ten favourite children's authors, Seuss is firmly established as a global best-seller, with nearly half a billion books sold worldwide.

As the first step in a major rebrand programme, HarperCollins is relaunching 17 of Dr. Seuss's best-selling books, including such perennial favourites as The Cat in the Hat, Green Eggs and Ham and Fox in Socks. In response to consumer demand, the bright new cover designs incorporate much needed guidance on reading levels, with the standard paperbacks divided into three reading strands – Blue Back Books for parents to share with young children, Green Back Books for budding readers to tackle on their own, and Yellow Back Books for older, more fluent readers to enjoy. Fox in Socks belongs to the Green Back Book range.