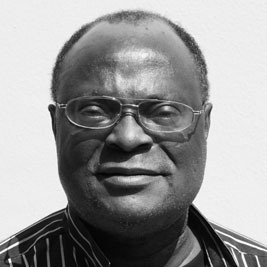 Femi Osofisan studied in Ibadan, Dakar and Paris and taught theatre and comparative literature at the University of Ibadan for 34 years, a post from which he recently retired.
Osofisan’s professional experience is manifold—he is an award-winning poet, writer, actor, company director, journalist and scholar. But it is as playwright that he established his reputation, having written and produced over fifty plays, roughly half of which have been published.
Among these are a series of plays which speak of Osofisan’s long-standing interest in reinterpreting European works in the context of African—specifically, Yoruba—traditions and customs. He approaches his continuous search for a viable modern written theatre that would still be authentically African not only in terms of shared thematic concerns but, more importantly, with a view to form and technique.
He has worked on several canonical texts—including Shakespeare, Chekov, Gogol, Brecht, Feydeau, Frisch, and Sophocles—and discussed in his essays the consequences of this interweaving of cultures aimed at producing a new synthesis. What comes out of the commingling of Soyinka and Brecht or Grotowski, Clark and Ogunde with Barrault, Rotimi with Mnouchekine and so on, particularly against the backdrop of our traditional performance aesthetics? How can all these elements be pressed into the service of a ‘committed theatre’ in the age of globalized neo-colonialism and increasingly globalized terrorism on the one hand and of ‘Nollywood’ and proliferating Pentecostal movements on the other?

Femi Osofisan is the author of books: Women of Owu, Morountodun And Other Plays, Tegonni: An African Antigone, Midnight Hotel, Once Upon Four Robbers, Birthdays are not for dying, The Oriki of a Grasshopper, and Other Plays, Aringindin and the Nightwatchmen, The Chattering and the Song, Who's Afraid of Solarin?: A Play in Honour of Dr. Tai Solarin

Women of Owu
This is an African retelling of Euripides: an unnervingly topical story of a people and a beloved city destroyed by the brutality of war. The play was first performed in Lagos in 2003 under the distinguished director Chuck Mike, and subsequently toured the UK.
02

Once Upon Four Robbers
The distinguished Nigerian playwright directed the first performance of this play at the Arts Theatre at the University of Ibadan. Osofisan's incisive vision is put at the service of oppressed humanity. His over-riding theme is that the machinery of oppression in human society is created by man, but man is also capable of demolishing it. The production includes Yoruba songs and incantations, and a glossary provides an English translation - as a guide for other directors to substitute appropriate dirges.
06

Birthdays are not for dying
07

The Oriki of a Grasshopper, and Other Plays
08

The Chattering and the Song
10

Who's Afraid of Solarin?: A Play in Honour of Dr. Tai Solarin