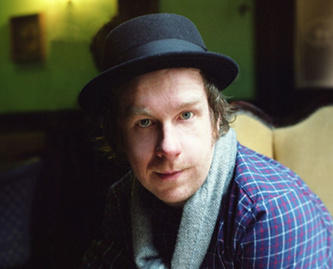 Kevin Barry is an Irish writer. He is the author of two collections of short stories, and the novel City of Bohane, which was the winner of the 2013 International IMPAC Dublin Literary Award.

Night Boat to Tangier
In the dark waiting room of the ferry terminal in the sketchy Spanish port of Algeciras, two aging Irishmen — Maurice Hearne and Charlie Redmond, longtime partners in the lucrative and dangerous enterprise of smuggling drugs — sit at night, none too patiently. It is October 23, 2018, and they are expecting Maurice’s estranged daughter (or is she?), Dilly, to either arrive on a boat coming from Tangier or depart on one heading there. This nocturnal vigil will initiate an extraordinary journey back in time to excavate their shared history of violence, romance, mutual betrayals and serial exiles, rendered with the dark humor and the hardboiled Hibernian lyricism that have made Kevin Barry one of the most striking and admired fiction writers at work today.
02

City of Bohane
Shortlisted for the 2011 Costa First Novel Award

Forty years in the future. The once-great city of Bohane on the west coast of Ireland is on its knees, infested by vice and split along tribal lines. There are the posh parts of town, but it is in the slums and backstreets of Smoketown, the tower blocks of the Northside Rises and the eerie bogs of Big Nothin' that the city really lives.

For years, the city has been in the cool grip of Logan Hartnett, the dapper godfather of the Hartnett Fancy gang. But there's trouble in the air. They say his old nemesis is back in town; his trusted henchmen are getting ambitious; and his missus wants him to give it all up and go straight... And then there's his mother.

City of Bohane is a visionary novel that blends influences from film and the graphic novel, from Trojan beats and calypso rhythms, from Celtic myth and legend, from fado and the sagas, and from all the great inheritance of Irish literature. A work of mesmerising imagination and vaulting linguistic invention, it is a taste of the glorious and new.
03

Beatlebone
A searing, surreal novel that blends fantasy and reality—and Beatles fandom—from one of literature’s most striking contemporary voices, author of the international sensation City of Bohane

It is 1978, and John Lennon has escaped New York City to try to find the island off the west coast of Ireland he bought eleven years prior. Leaving behind domesticity, his approaching forties, his inability to create, and his memories of his parents, he sets off to calm his unquiet soul in the comfortable silence of isolation. But when he puts himself in the hands of a shape-shifting driver full of Irish charm and dark whimsy, what ensues can only be termed a magical mystery tour.
Beatlebone is a tour de force of language and literary imagination that marries the most improbable elements to the most striking effect. It is a book that only Kevin Barry would attempt, let alone succeed in pulling off—a Hibernian high wire act of courage, nerve, and great beauty.
04

Dark Lies the Island
A new book from the winner of the 2012 Sunday Times EFG Private Bank Short Story Prize.
A kiss that just won't happen. A disco at the end of the world. A teenage goth on a terror mission. And OAP kiddie-snatchers, scouse real-ale enthusiasts, and occult weirdness in the backwoods.

Dark Lies the Island is a collection of unpredictable stories about love and cruelty, crimes, desperation, and hope from the man Irvine Welsh has described as 'the most arresting and original writer to emerge from these islands in years'. Every page is shot through with the riotous humour, sympathy and blistering language that mark Kevin Barry as a pure entertainer and a unique teller of tales.
05

There are Little Kingdoms
Kevin Barry received widespread critical acclaim and the Rooney prize for Irish Literature following the publication of this first book of stories in 2007. His stories have since appeared in The New Yorker and in the Granta Book of the Irish Short Story. His debut novel, City Of Bohane, was published by Jonathan Cape in April 2011. Could easily have been titled These Are Little Masterpieces'. Barry gathers all the bewildered exasperation that Irish playwrights from Tom Murphy to Marina Carr and Enda Walsh have identified, and brings it, most brilliantly, to his dark, blackly hilarious and horrifically realistic narratives.'-Eileen Battersby, The Irish Times
06

Published in 2011, New Irish Short Stories, edited by Joseph O'Connor, has sold over 10,000 copies to date and featured Kevin Barry's 'Beer Trip to Llandudno' - winner of the 2012 Sunday Times EFG Short Story Prize - as well as stories by William Trevor, Dermot Bolger and Roddy Doyle which went on to be Afternoon Readings on BBC Radio 4.
07

Beer Trip to Llandudno
Join the Merseyside branch of the Real Ale Club on their July outing, and read a short story unlike any other – a small work of genius, which is unforgettably funny and full of heart.

‘Beer Trip to Llandudno’ was the winner of the Sunday Times/EFG Private Bank short story prize, and is taken from Kevin Barry’s collection Dark Lies the Island, available now in both physical and digital editions.
09

This is a limited edition Waterstones exclusive.
10

Winter Pages vol 1
Winter Pages 1 is the first volume of an annual arts anthology for Ireland and beyond. It offers stories, essays, reportage, photography and visual arts, along with craft interviews on film, theatre, television, music and much more. It assembles an unprecedented contributor list featuring many of the finest writers and artists working in Ireland and abroad today.

Kevin Barry is the IMPAC-award winning author of the novels Beatlebone and City of Bohane and the story collections Dark Lies the Island and There are Little Kingdoms. He edited Town and Country: New Irish Short Stories for Faber and Faber.

Olivia Smith has published widely as an academic. She is currently working on a project on Irish Law and Irish Letters.

Contributors and interviewees include: