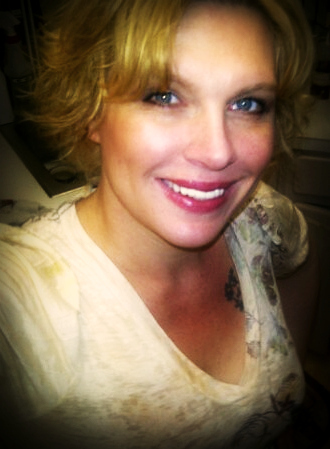 Karma Wilson grew up an only child of a single mother in the wilds of North Idaho. Way back then (just past the stone age and somewhat before the era of computers) there was no cable TV and if there had been Karma could not have recieved it. TV reception was limited to 3 channels, of which one came in with some clarity. Karma did the only sensible thing a lonely little girl could do…she read or played outdoors.

Playing outdoors was fun, but reading was Karma’s “first love” and, by the age 11, she was devouring about a novel a day. She was even known to try to read while riding her bike down dirt roads, which she does not recommend as it is hazardous to the general well being of the bike, the rider, and more importantly the book. Her reading preferences were fantasy (C.S. Lewis, Terry Brooks, etc…) and historical fiction (L.M. Montgomery, Laura Ingalls Wilder, etc…). Those tastes have not changed much.

Karma never considered writing as a profession because her mother was a professional writer which made it seem like mundane work. At the age of 27 she realized that she still loved well-written children’s books of all kinds, from picture books to young adult novels. By that time Karma was a wife and the mother of three young children. Trips to the library with her kids were a combination of emotions…a good book meant fun for all! But so many of the books weren’t what her children wanted to listen to.

Then a tax refund changed everything. With the money the family decided to invest in a computer. Karma was forced to learn to type. Combining her desire to make the expensive computer pay for itself, her new-found typing skill, and her love of children’s literature, Karma started writing for children. She wanted to put a few more good books on the library shelves and pay off that computer! Countless rejections and three years later Karma was finally accepted by book agent Steven Malk (who had already rejected her once, which she never lets him forget). Her first book, Bear Snores On, was released in 2002. The computer was paid for!

Since then Karma has had more than 30 books accepted for publication. Many of those are on the shelves of libraries and bookstores around the world. Her books have received numerous state and national awards, been translated into dozens of languages, and a few have made an appearance on the New York Times bestseller list. Karma sincerely hopes that her books bring joy to children and families everywhere.

Karma writes humorous, rhythmic picture books for the very young, and humorous and wistful poetry for the primary grades.

These days Karma lives with her handsome husband Scott, and her three not-so-young-anymore children, two dogs, two chickens and one cat on some modest but lovely acreage in NW Montana. Her hobbies include reading (of course), photography, baking, yoga, and a passion for Mixed Martial Arts.

Bear Snores On
One by one, a whole host of different animals and birds find their way out of the cold and into Bear's cave to warm up. But even after the tea has been brewed and the corn has been popped, Bear just snores on!
See what happens when he finally wakes up and finds his cave full of uninvited guests -- all of them having a party without him!
02

Bear Stays Up for Christmas

"The day before Christmas,

snuggled on his floor,

Bear's friends are determined to keep Bear awake for Christmas! So they wake Bear up and have him help them find a Christmas tree, bake cakes, hang up stockings, and sing Christmas songs. Bear stays up -- by discovering that giving is one of the best Christmas presents!

How a SURPRISE visit from someone very special gives Bear and his friends a Christmas to remember makes an enchanting holiday story for young readers. With Karma Wilson's memorable text and Jane Chapman's glowing illustrations, Bear Stays Up for Christmas is a book to cherish throughout the year.

in his warm winter den

a bear wakes up

Autumn has come to the woods, and Bear doesn't feel well. He sniffles and sneezes. He cannot sleep. He aches all over. Worst of all, he's feeling too poorly to play with his friends.

How Bear's good friends take care of him with herbal tea and lullabies until he begins to FEEL BETTER is the heart of this loving story that will be familiar to any little one who has ever had the sniffles.

The Cow Loves Cookies
The horse loves hay, the chickens need feed, the geese munch on corn, the hogs devour slop, the dog eats treats, but the cow loves…COOKIES? Don’t miss this barnyard treat, featuring a new cover, from the author of the New York Times bestselling Bear series.

With an original twist on the ordinary barnyard picture book, this read-aloud from bestselling author Karma Wilson is a clever exploration of a curious incident on the farm. As the farmer makes his rounds each day, most of the animals chew on the foods a young reader would expect. But when it’s time to feed the cow, she feasts on a special treat! Wilson's signature style and Marcellus Hall’s spirited watercolors will delight children on and off the farm—because when it comes down to it, who doesn’t love milk and cookies?
06

Bear Feels Scared
Bad weather frightens Bear, but his woodland friends are there to help him in this sweet, reassuring Bear story from bestselling duo Karma Wilson and Jane Chapman!

In the deep, dark woods
by the Strawberry Vale,
a big bear lumbers
down a small, crooked trail…

The sun is setting and it’s getting chilly. When Bear’s friends discover that he is not at home in his lair, they march out into the cold to find their pal. Friends don’t let friends stay lost! Wren, Owl, and Raven take to the skies while Badger, Mole, and Mouse search on the ground. Pretty soon Bear is found, and once he’s back in his cave, he feels quite safe with his friends all around.
07

Bear's New Friend
Bear is going to the swimming hole, but first he must find his friends.

Something quickly scampers by! Is it Hare? No . . .

Someone seems to be hiding from Bear and his friends. Who is it? WHO?

Bear Says Thanks
What better way for Bear to say thanks, than to have a big dinner with all his friends!

Bear has come up with the perfect way to say thanks—a nice big dinner! When Bear decides to throw a feast, his friends show up one by one with different platters of delicious food to share. There’s just one problem: Bear’s cupboards are bare! What is he to do?

Karma Wilson’s playful text and Jane Chapman’s charming illustrations bring to life this celebration of family and friendship. Young readers will delight in discovering the special gift Bear has to share.
09

Bear's Loose Tooth
Bear and his friends are munching on their lunch when, all of sudden, Bear feels something wiggling and wobbling in his mouth. Oh, no! What can it be? It’s Bear’s first loose tooth!

From a cave in the forest
came a “MUNCH, MUNCH, CRUNCH!”
as Bear and his friends
all nibbled on their lunch.

Bear and his friends are munching on their lunch, when all of sudden… Bear feels something wiggling and wobbling in his mouth. Oh, no! What can it be? It’s Bear’s first loose tooth!

In the first Bear book in three years, Bear’s friends ease his concerns about his wiggly, wobbly tooth and help him understand losing a baby tooth is perfectly natural. This funny and reassuring story will delight anyone who’s ever had a loose tooth.
10

Bear Sees Colors
Explore colors with Bear in the first of a new concept picture book series from the New York Times bestselling creators of Bear Snores On.

Karma Wilson’s playful text and Jane Chapman’s adorable illustrations creatively introduce colors to the youngest Bear fans, who will delight in discovering a rainbow of fun.