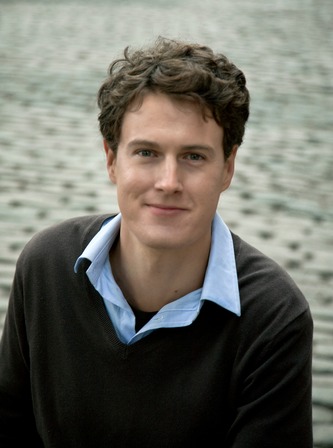 I grew up in College Station, TX and first began writing in elementary school. I would write stories and poems with the intention of making my classmates laugh. Twenty years later, I used this same technique to write my first kid’s book.

Over the years, I’ve worked a lot of different jobs—farm laborer, art gallery assistant, bartender, assistant literary agent—before settling on the two jobs that I currently hold: Writer and freelance translator. I now live in Brooklyn with my wife and two cats.

The Mystery of Alice
Thirteen-year-old Emily Poe has been given the opportunity of a lifetime: a chance to attend the exclusive Audyn School in Manhattan. But to win the scholarship, she has to pass a test like nothing she’s ever experienced before: a nearly bare room, a set of strange clues, a locked door. Plus, a mysterious organization—the Leopold Foundation—is watching her every move.

But the real test has just begun. Despite the strange circumstances—in a new house, at a new school—Emily instantly bonds with fellow scholarship winner Alice Wray.

And then Alice goes missing.

Chronicling every surprising twist and turn of her search through her own private video diary, Emily sets out to find the truth behind Alice’s disappearance. Soon, she’s drawn deep into the inner circle of the Audyn School’s elite, the Nobility, who each have secrets of their own. As clues and lies mount, Emily must sort truth from fiction to solve The Mystery of Alice before it’s too late.
02

Interview with the Robot
Listening Length: 3 hours and 42 minutes

Eve looks like an ordinary 12-year-old girl, but there’s nothing ordinary about her. She has no last name. No parents or guardian. She’s on the run from a dangerous and secretive organization that will stop at nothing to track her down.

And most astonishing of all: She’s a robot, a product of Eden Labratories.

When she discovers the truth, she realizes everything she thought she knew about herself is a lie. Eve manages to escape, fleeing the lab, the only home she’s ever known.

After being arrested for shoplifting, Eve is interviewed by Petra Amis from Child Welfare Services. Her incredible story unfolds during the interrogation, with flashbacks to her life inside Eden Laboratories, which has a dark secret.

Exploring a range of topics that drive our society and our lives - topics such as artificial intelligence and human nature - Interview with the Robot is a story told by a startlingly original protagonist, a story that explores the vast potential of technology and the deep complexities of humanity.
03

Joshua Dread (Joshua Dread #1)
For Joshua Dread, middle school is proving to be, well, awkward. Not only do bullies pick on him, but do you see those supervillains over there trying to flood the world? The ones that everyone, including his best friend Milton, are rooting for Captain Justice to take down? They're the Dread Duo, and they just happen to be his parents.

As if trying to hide his identity wasn't hard enough, Joshua has started leaving a trail of exploding pencils and scorched handprints in his wake and only Sophie, the new girl in town with a mysterious past, seems unsurprised. When a violent attack at the Vile Fair makes it clear someone is abducting supervillains and that his parents may very well be next, Joshua must enlist both Sophie and Milton's help to save them.
04

The Nameless Hero (Joshua Dread #2)
The second book in the JOSHUA DREAD series by Lee Bacon! From the moment Joshua Dread receives an invitation to Gyfted & Talented, the mysterious program for kids with superpowers, his plans for a normal summer turn upside down. Evil maniac Phineas Vex is still alive—and he wants Joshua dead. So if G&T can help prepare Joshua for battle, he's all in. And so are Sophie and Milton.

Except they get more than they bargained for. The truth is that Joshua and his friends have been chosen to form the greatest superhero team of all time. That is, if they make it through G&T's rigorous training.

Suddenly Joshua is thrust into the media spotlight, and it's not as glamorous as people think. And what will happen if his supervillain parents find out that the new celebrity superhero is . . . Joshua?

No one ever said fighting evil would be easy.


From the Hardcover edition.
05

The Dominion Key (Joshua Dread #3)
The third book in the series! The summer is coming to an end and Joshua—along with his friends Sophie, Milton, and Miranda—are about to begin seventh grade. But when a trip to the mall turns into an attack by nFinity and a couple of Phineas Vex's goons, it becomes clear that they're no longer safe in Sheepsdale. To ensure their safety, Joshua and his friends must enroll in Alabaster Academy, a school for Gyfted kids. Located on an isolated island where there are only two types of weather (rainy and very rainy), Alabaster  is filled with every kind of superpowered student you can imagine—not to mention a whole new species of bully. But when Alabaster comes under attack, Joshua and his friends are forced to escape once again. Their only hope for survival is to find a mysterious key that will enable complete world domination for whoever possesses it. But what if Phineas Vex finds the key first?

"A worthy addition to an original and creative series."--School Library Journal


From the Hardcover edition.
06

The Last Human
In a future when humans are believed to be extinct, what will one curious robot do when it finds a girl who needs its help?

In the future, robots have eliminated humans, and 12-year-old robot XR_935 is just fine with that. Without humans around, there is no war, no pollution, no crime. Every member of society has a purpose. Everything runs smoothly and efficiently. Until the day XR discovers something impossible: a human girl named Emma. Now, Emma must embark on a dangerous voyage with XR and two other robots in search of a mysterious point on a map. But how will they survive in a place where rules are never broken and humans aren’t supposed to exist? And what will they find at the end of their journey?
07

The Battle for Urth (Legendtopia #1)
Welcome to LEGENDTOPIA, where fantasy meets reality in a new series from the author of JOSHUA DREAD! Two kids--Kara, a girl from our world, and Prince Fred, a royal boy from the kingdom of Heldstone--join forces to save Urth.

Have you ever been on a school trip that went totally, epically wrong? That’s what happens when Kara visits Legendtopia, a fantasy-theme restaurant with her class. She’s just trying to retrieve her prized necklace when she stumbles through a small wooden door . . . and into a magical world where dragons breathe fire and an evil sorceress is out to get her!

Luckily, Prince Fred is ready to be at Kara’s service. He’s desperate for someone in the kingdom of Heldstone to recognize his bravery—and he knows exactly how to handle ogres and elves. But he’s clueless when it comes to Urth, a mystical and thrilling place with cars and cell phones. That’s exactly where he ends up when he follows Kara back through the door. And he’s not the only one after Kara. . . .

Magic is spreading. A dark kingdom is rising. And the fate of not one, but two worlds rests in Kara’s and Fred’s hands.


From the Hardcover edition.
08

A Mutant Named Mizzie: A Joshua Dread Story, as Told by Captain Justice
Meet Captain Justice, the superhero star of A MUTANT NAMED MIZZIE in Lee Bacon's funny original digital story set in the exciting world of his JOSHUA DREAD series for ages 9-12. Who knows what to do with a poor little mutant baby better than Captain Justice?
09

The Shadow Queen (Legendtopia #2)
The second book in the Legendtopia series, fast-paced action-adventure novels that will have you racing through the pages to get to the fantastical finish! Two kids Kara, a girl from our world, and Prince Fred, a royal boy from the kingdom of Heldstone join forces to save Urth.
Kara and her royal BFF, Prince Fred, are on the most important mission of their lives. Kara s long-lost dad is trapped in the magical kingdom of Heldstone and the two friends are on an epic quest to rescue him.
It won t be easy. Heldstone is bustling with parades and parties in preparation for the Luminary Ball, an incredible celebration of the royal family. But not everyone is in the mood to celebrate. The evil Sorceress has transformed into the Shadow Queen. She has poisoned the prince s parents, and unless Kara and Fred find an antidote, the king and queen will be dead in three days. Their search will take them outside the palace walls, into an enchanting and dangerous world of talking animals, fierce monsters, and vegetarian trolls . . . all the while being hunted by the Sorceress and her evil army of shadows.
Can Kara and Fred save their parents? Or will the Shadow Queen destroy them all?"
10