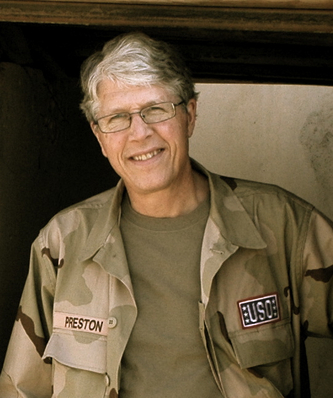 Douglas Preston was born in Cambridge, Massachusetts, in 1956, and grew up in the deadly boring suburb of Wellesley. Following a distinguished career at a private nursery school--he was almost immediately expelled--he attended public schools and the Cambridge School of Weston. Notable events in his early life included the loss of a fingertip at the age of three to a bicycle; the loss of his two front teeth to his brother Richard's fist; and various broken bones, also incurred in dust-ups with Richard. (Richard went on to write The Hot Zone and The Cobra Event, which tells you all you need to know about what it was like to grow up with him as a brother.)

As they grew up, Doug, Richard, and their little brother David roamed the quiet suburbs of Wellesley, terrorizing the natives with home-made rockets and incendiary devices mail-ordered from the backs of comic books or concocted from chemistry sets. With a friend they once attempted to fly a rocket into Wellesley Square; the rocket malfunctioned and nearly killed a man mowing his lawn. They were local celebrities, often appearing in the "Police Notes" section of The Wellesley Townsman. It is a miracle they survived childhood intact.

After unaccountably being rejected by Stanford University (a pox on it), Preston attended Pomona College in Claremont, California, where he studied mathematics, biology, physics, anthropology, chemistry, geology, and astronomy before settling down to English literature. After graduating, Preston began his career at the American Museum of Natural History in New York as an editor, writer, and eventually manager of publications. (Preston also taught writing at Princeton University and was managing editor of Curator.) His eight-year stint at the Museum resulted in the non-fiction book, Dinosaurs in the Attic, edited by a rising young star at St. Martin's Press, a polymath by the name of Lincoln Child. During this period, Preston gave Child a midnight tour of the museum, and in the darkened Hall of Late Dinosaurs, under a looming T. Rex, Child turned to Preston and said: "This would make the perfect setting for a thriller!" That thriller would, of course, be Relic.

In 1986, Douglas Preston piled everything he owned into the back of a Subaru and moved from New York City to Santa Fe to write full time, following the advice of S. J. Perelman that "the dubious privilege of a freelance writer is he's given the freedom to starve anywhere." After the requisite period of penury, Preston achieved a small success with the publication of Cities of Gold, a non-fiction book about Coronado's search for the legendary Seven Cities of Cibola. To research the book, Preston and a friend retraced on horseback 1,000 miles of Coronado's route across Arizona and New Mexico, packing their supplies and sleeping under the stars--nearly killing themselves in the process. Since then he has published several more non-fiction books on the history of the American Southwest, Talking to the Ground and The Royal Road, as well as a novel entitled Jennie. In the early 1990s Preston and Child teamed up to write suspense novels; Relic was the first, followed by several others, including Riptide and Thunderhead. Relic was released as a motion picture by Paramount in 1997. Other films are under development at Hollywood studios. Preston and Child live 500 miles apart and write their books together via telephone, fax, and the Internet.

Preston and his brother Richard are currently producing a television miniseries for ABC and Mandalay Entertainment, to be aired in the spring of 2000, if all goes well, which in Hollywood is rarely the case.

Relic (Pendergast, #1)
Just days before a massive exhibition opens at the popular New York Museum of Natural History, visitors are being savagely murdered in the museum's dark hallways and secret rooms. Autopsies indicate that the killer cannot be human...

But the museum's directors plan to go ahead with a big bash to celebrate the new exhibition, in spite of the murders.

Museum researcher Margo Green must find out who-or what-is doing the killing. But can she do it in time to stop the massacre?
02

The Cabinet of Curiosities (Pendergast, #3)
In downtown Manhattan, a gruesome discovery has just been made-an underground charnel house containing the bones of dozens of murder victims. Research reveals that a serial killer was at work in New York's notorious Five Points neighborhood in the 1880s, bent on prolonging his lifespan by any means. When a newspaper story on the old murders appears to ignite a new series of horrifyingly similar killings, panic overtakes New York City. Now, FBI agent Pendergast, journalist Bill Smithback, and archaeologist Nora Kelly join forces to protect themselves from a vicious killer...before they become the next victims.
03

Reliquary (Pendergast, #2)
Hidden deep beneath Manhattan lies a warren of tunnels, sewers, and galleries, mostly forgotten by those who walk the streets above. There lies the ultimate secret of the Museum Beast. When two grotesquely deformed skeletons are found deep in the mud off the Manhattan shoreline, museum curator Margo Green is called in to aid the investigation. Margo must once again team up with police lieutenant D'Agosta and FBI agent Pendergast, as well as the brilliant Dr. Frock, to try and solve the puzzle. The trail soon leads deep underground, where they will face the awakening of a slumbering nightmare.
04

Brimstone (Pendergast, #5; Diogenes, #1)
Behind the gates of a fabulous Hamptons estate, FBI Special Agent Pendergast comes upon the carnage of a gruesome crime: one that recalls the legendary horrors that befall those who make a Faustian pact with the devil. Surrounded by the choking stench of brimstone, the smoldering remains of art critic Jeremy Grove are found in a locked, barricaded attic next to a hoofprint singed into the floorboards.

Unable to resist a case that defies all but supernatural logic, Pendergast reunites with police officers Vincent D'Agosta (Relic) and Laura Hayward (Reliquary) to search for a more earthly explanation. But their investigation soon takes them from the luxury estates of Long Island and penthouses of New York City to the crumbling, legend-shrouded castles of the Italian countryside, where thirty years ago four men conjured up something unspeakable. . .
05

Still Life With Crows (Pendergast, #4)
A small Kansas town has turned into a killing ground.
Is it a serial killer, a man with the need to destroy?
Or is it a darker force, a curse upon the land?
Amid golden cornfields, FBI Special Agent Pendergast discovers evil in the blood of America's heartland.
No one is safe.
06

The Book of the Dead (Pendergast, #7; Diogenes, #3)
An FBI agent, rotting away in a high-security prison for a murder he did not commit...

His brilliant psychotic brother, about to perpetrate a horrific crime...

A young woman with an extraordinary past, on the edge of a violent breakdown...

An ancient tomb with an enigmatic curse, about to be unveiled at a celebrity-studded New York gala...

The New York Museum of Natural History receives their pilfered gem collection back...ground down to dust. Diogenes, the psychotic killer who stole them in Dance of Death, is throwing down the gauntlet to both the city and to his brother, FBI Agent Pendergast, who is currently incarcerated in a maximum security prison.

To quell the PR nightmare of the gem fiasco, the museum decides to reopen the Tomb of Senef. An astounding Egyptian temple, it was a popular museum exhibit until the 1930s, when it was quietly closed. But when the tomb is unsealed in preparation for its gala reopening, the killings--and whispers of an ancient curse--begin again. And the catastrophic opening itself sets the stage for the final battle between the two brothers: an epic clash from which only one will emerge alive.
07

Fever Dream (Pendergast, #10)
Yesterday, Special Agent Pendergast still mourned the loss of his beloved wife, Helen, who died in a tragic accident in Africa twelve years ago. Today, he discovers she was murdered. Tomorrow, he will learn her most guarded secrets, leaving him to wonder: Who was the woman I married? Why was she murdered? And, above all . . . Who murdered her? FEVER DREAM Revenge is not sweet: It is essential.
08

Dance of Death (Pendergast, #6; Diogenes, #2)
Two brothers on opposite sides of the law battle it out on the streets of New York in this chill-inducing thriller, a follow-up to BRIMSTONE. — As the previous installment came to a close, vicious dogs and armed men surrounded FBI Special Agent Aloysius Pendergast and his demise seemed certain. Nevertheless, he did leave behind a legacy: a letter for his friend, NYPD Lieutenant Vincent D'Agosta. Its contents ask D'Agosta to assume the responsibility of pursuing Pendergast's younger brother Diogenes, an insane and vengeful genius who has sworn to commit the perfect crime on January 28 -- which is now only one week away.
09

Thunderhead
Nora Kelly, a young archaeologist in Santa Fe, receives a letter written sixteen years ago, yet mysteriously mailed only recently. In it her father, long believed dead, hints at a fantastic discovery that will make him famous and rich---the lost city of an ancient civilization that suddenly vanished a thousand years ago. Now Nora is leading an expedition into a harsh, remote corner of Utah's canyon country. Searching for her father and his glory, Nora begins to unravel the greatest riddle of American archeology. but what she unearths will be the newest of horrors...
10

The Monster of Florence
In the nonfiction tradition of John Berendt (Midnight in the Garden of Good and Evil) and Erik Larson (The Devil in the White City), New York Times bestselling author Douglas Preston presents a gripping account of crime and punishment in the lush hills surrounding Florence, Italy.

In 2000, Douglas Preston fulfilled a dream to move his family to Italy. Then he discovered that the olive grove in front of their 14th century farmhouse had been the scene of the most infamous double-murders in Italian history, committed by a serial killer known as the Monster of Florence. Preston, intrigued, meets Italian investigative journalist Mario Spezi to learn more.

This is the true story of their search for—and identification of—the man they believe committed the crimes, and their chilling interview with him. And then, in a strange twist of fate, Preston and Spezi themselves become targets of the police investigation. Preston has his phone tapped, is interrogated, and told to leave the country. Spezi fares worse: he is thrown into Italy's grim Capanne prison, accused of being the Monster of Florence himself. Like one of Preston's thrillers, The Monster of Florence, tells a remarkable and harrowing story involving murder, mutilation, and suicide—and at the center of it, Preston and Spezi, caught in a bizarre prosecutorial vendetta.