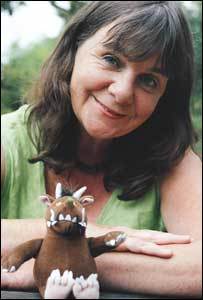 Growing up
I grew up in a tall Victorian London house with my parents, grandmother, aunt, uncle, younger sister Mary and cat Geoffrey (who was really a prince in disguise. Mary and I would argue about which of us would marry him).

Mary and I were always creating imaginary characters and mimicking real ones, and I used to write shows and choreograph ballets for us. A wind-up gramophone wafted out Chopin waltzes.

I studied Drama and French at Bristol University, where I met Malcolm, a guitar-playing medic to whom I’m now married.

Busking and books
Before Malcolm and I had our three sons we used to go busking together and I would write special songs for each country; the best one was in Italian about pasta.

The busking led to a career in singing and songwriting, mainly for children’s television. I became an expert at writing to order on such subjects as guinea pigs, window-cleaning and horrible smells. “We want a song about throwing crumpled-up wrapping paper into the bin” was a typical request from the BBC.

I also continued to write “grown-up” songs and perform them in folk clubs and on the radio, and have recently released two CDs of these songs.

One of my television songs, A SQUASH AND A SQUEEZE, was made into a book in 1993, with illustrations by the wonderful Axel Scheffler. It was great to hold the book in my hand without it vanishing in the air the way the songs did. This prompted me to unearth some plays I’d written for a school reading group, and since then I’ve had 20 plays published. Most children love acting and it’s a tremendous way to improve their reading.

My real breakthrough was THE GRUFFALO, again illustrated by Axel. We work separately - he’s in London and I’m in Glasgow - but he sends me letters with lovely funny pictures on the envelopes.

I really enjoy writing verse, even though it can be fiendishly difficult. I used to memorise poems as a child and it means a lot to me when parents tell me their child can recite one of my books.

Funnily enough, I find it harder to write not in verse, though I feel I am now getting the hang of it! My novel THE GIANTS AND THE JONESES is going to be made into a film by the same team who made the Harry Potter movies, and I have written three books of stories about the anarchic PRINCESS MIRROR-BELLE who appears from the mirror and disrupts the life of an otherwise ordinary eight-year-old. I have just finished writing a novel for teenagers.

When I’m not writing I am often performing, at book festivals and in theatres. I really enjoy getting the children in the audience to help me act out the stories and sing the songs. When Malcolm can take time off from the hospital he and his guitar come too. and it feels as if we’ve come full circle - back to busking.

Julia Donaldson is the author of books: The Gruffalo, Room on the Broom, The Gruffalo's Child, The Snail and the Whale, A Squash and a Squeeze, Stick Man, The Smartest Giant in Town, Where's My Mom?, Charlie Cook's Favorite Book, Zog

The Gruffalo
This is a rhyming story of a mouse and a monster. Little mouse goes for a walk in a dangerous forest. To scare off his enemies he invents tales of a fantastical creature called the Gruffalo. So imagine his surprise when he meets the real Gruffalo.
02

Room on the Broom
The witch and her cat are happily flying through the sky on a broomstick when the wind picks up and blows away the witch's hat, then her bow, and then her wand!  Luckily, three helpful animals find the missing items, and all they want in return is a ride on the broom.  But is there room on the broom for so many friends?  And when disaster strikes, will they be able to save the witch from a hungry dragon?
03

The Gruffalo's Child
The Gruffalo said that no gruffalo should ever set foot in the deep dark wood.

But one wild and windy night the Gruffalo's Child ignores her father's warnings and tiptoes out into the snow. After all, the Big Bad Mouse doesn't really exist . . . does he?

The Snail and the Whale
A snail longs to see the world and hitches a lift on a whale's tail. Together they go on an amazing journey, past icebergs and volcanoes, sharks and penguins, and the snail feels very small in the vastness of the world. But when the whale is beached in a bay, it's the tiny snail who saves the day.
05

A Squash and a Squeeze
With the help of an old man and all of her animals, an old lady realises that her house is not as small as she thought it was.

"a bit of a classic ... A goat on the bed and a cow on the table tapping out a jig? My readers collapsed in heaps, and then had to have it read again. And again."
- Vivian French in The Guardian
06

Stick Man
Stick Man lives in the family tree
With his Stick Lady Love
and their stick children three ...

"a cracker of a book"
- Financial Times

So, one day, he sees a shop selling giant-size clothes, he decides it's time for a new look. With smart trousers, a smart shirt, stripy tie and shiny shoes, George is a new giant.

But on his way home, he meets various animals who desperately need his help ... and his clothes!

"My absolute favourite of this year's picture books ... Julia Thompson and Axel Scheffler are a combination made in heaven." - The Independent on Sunday

Zog
Zog, a young accident-prone dragon, who wants to be the best student in dragon school, is the keenest dragon in the school, but will he ever win a golden star?